Whenever I try to install virtualmin pro via the script, it ends a warning and finally is -not- able to resolve on the actual chosen hostname for the server, however if I enter the panel address using my -private- ip address the control panel is visible. If I try to replace the private IP address with my server’s public address it will not resolve and the panel can not be reached.

Which is wrong because eth0 does exist. This is my /etc/network/interfaces file:

Also, my /etc/hosts file config is correct (no errors or warning before installation)

Can someone help me solve this issue? Does vm need a static ip?

If memory serves, you have to specify the hostname in the Alibaba control panel for it to apply.

What a horrible interface they have!

I already did that… seems to be a different problem… :-/

Also www.intodns.com says that my domain is resolving correctly with exception of the mx record.

I also have these DNS records with alibaba 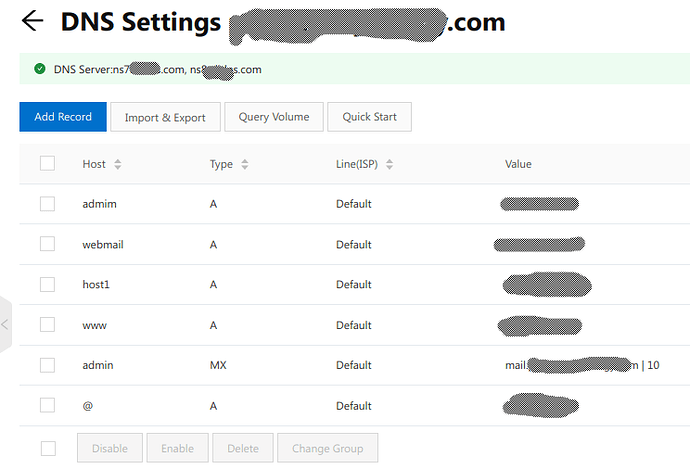 my panel is on admin.example.com

I found this thread:

Same problem here. Tried to reinstall Debian 9.6 from scratch, rename interface to eth0, install vmware-tools right after fresh install (since it’s running in a VM). We bought the professional full-version, reinstalled again, retried, changed eth hardware setup in ESXi -> Always same error: [ERROR] Fatal Error Occurred: Unable to determine IP address of selected interface. Cannot continue And then the script terminates and the network link is dead. We suppose that the Debian netinst does not …

So I tried to run:

#ifup eth0 when the warning appeared… no luck same problem

Is this bug only in Debian, if I switch to ubuntu can I get rid of it?

Will a static ip solve the problem?

Actually, I guess we want to even go earlier (though there appears to be a bug in that fallback code). The first failure is that it can’t figure out that what the default route device is.

The redacted is all private ip stuff