I have a vanilla installation of VMin with just one primary nameserver. Anytime I visit www.mydomain.tlp, my webbrowser redirects me to mydomain.tlp …

I tried asking my registrar’s support and I tried their solution to no avail. 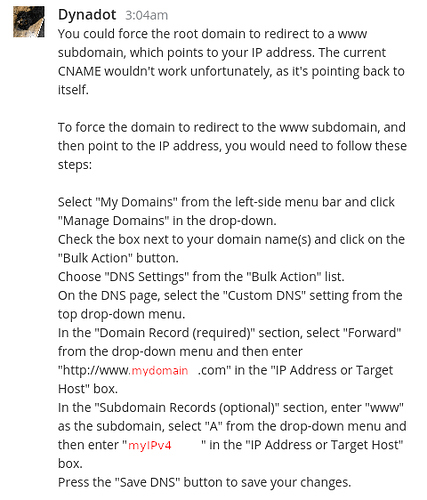 The DNS zone for that domain has a record for the domain and one for the www FQDN. But I don’t think that matters because I think I am using my registrar’s nameservers by default. I only have my primary nameserver on my VMin install.

Any ideas? I feel stranded like a whale on a beach.

Chrome browser could be the culprit - versions of chrome after 76 strip the https and www from the URL. You can see the actual URL by double-clicking on the address bar of the browser.

Hi @calport! I use Firefox and I checked by clicking the address bar. Other websites are displayed with the www subdomain. @DrCarsonBeckett, I also took DNS timing into account.

My apache server has mod_rewrite activated … but I don’t know what to do with it. My virtual servers have a few .htaccess documents … but they contain only code related to WordPress.

It might cause a loop, if its not what I expect. Try to add this code into the .htaccess file:

huh? - in same /...folder ? - might you find a problem. - you should have only one .htaccess file in folder you trying.

@unborn I think he meant it more like on his servers are a few of them.
Otherwise I dont think you can have multiple files with the same name. Still, I am interessted in that answer now too. Didnt thought about that statement like that.

@unborn, @DrCarsonBeckett there are several documents in the servers, one per folder.

I am reading about Apache language and directives … I will test your code soon, when I am a bit more familiar with the language. Thanks for the hint.

That code should be placed on the top level folder or within the main directory of website you want to redirect.

I have tried the code before and after some code WordPress automatically writes to my .htacces file in the virtual servers’s public_html directory, and it breaks the site.

Here is the WordPress code:

I have also tried

but these also broke the site infront and after the WordPress bits.

I have tried taking the constant [L] out of the code so Apache, when placing it in front of the WordPress bit so it is not the last directive it reads … and then I got a 301 Error with a link that loops.

This I also tried just using:

and the browser just displays the url with no www in front.

I am also trying to understand the language of Apache directives … but I have read the language is just called Apache? And I have found this chart

Constants and their meaning:

That helps understanding some of your code @DrCarsonBeckett, but I have no idea what the % or the ! do or what [HTTP_HOST] might be … I am so lost.

I think it is very strange that the WordPress directives have to directives with the [L] constant.

Ok … I changed it through WordPress

Thats one way to go. Btw, from what I read, you misunderstood the code itself and placed parts lines which were seemingly active already.
Its possible that my code wasnt valid anymore, just checked older .htaccess files of mine for that (which werent in use anymore).
But glad you fixed it.