Which of the three Grade A OSs to use?

I am getting back to the Virtual/Web-Min combo but when looking at this I have some challenges:

CentOS Linux is being sundowned in december. Would CentOS Stream work , which I don’t know a lot about and frankly could work, but that is why I am asking here.

The ONLY obvious grade A left is Ubuntu.
You guys do not mention Ubuntu Server, but that is the one I would choose. Get Ubuntu Server | Download | Ubuntu

Would that be ok?

Yes, Ubuntu Server 20.04 LTS would be just fine (minimal clean install from an image). It is a great choice.

CentOS Stream should also work though, however if I had to choose between these two, I would have chosen Ubuntu Server over CentOS Stream, well, at least for now.

Its a very broad question, preferences dependant on experience and what the service is for. I am using CentOS 8.3 at the moment and happy to stay until later this year. Eventually, I think I will migrate to RedHat as they now include 16 free licenses. I would not stay on Stream for production. You can use Ubuntu server. There will be a few new distros popping up based on RH/CentOS variation, personally I dont want to start something that might die within 24 months. Ubuntu is a good option but again a personal choice and how the server is managed. There is probably also a difference whether you host from home or in a datacentre versus clients.

Well, that is just the thing. You don’t want to expose yourself to a migration scenario if it can be helped and while there are differences between distributions I do not plan to use their native functionality any more than absolutely necessary.

Maybe you could do some changes in the page handling that to reflect current state of the OS?
https://www.virtualmin.com/os-support

Ubuntu 16 is end of life. Don’t even consider it. If you’re going Ubuntu, 20 is the only way to go as 18 only has a couple years left.

I’ve actually set up another little experiment server with Debian 10 after a post @Joe made and I really like it. So far not a single, unnecessary update. With Ubuntu it just seems like there’s an update every single day for some reason.

Seems you did not read my original post very well.

Debian would be my 1st choice as well, but I am not buying new NIC’s or changing a serverboard only for that.

Since you persist.
Debian has inherently poor support for NIC Chipsets that are not Intel. They made that decision a few years ago and I investigated this extensively because I could not believe I would not be able to run Debian off a standard HPE server with default hardware. Turns out my NIC’s were Broadcom, particularly the BNX2 driver.
So I tried the NON-Free version of Debian: Debian -- Details of package firmware-bnx2 in buster
to no avail.
Explanation of Debians Non-Free: 2. The Debian Archive — Debian Policy Manual v4.5.1.0

Whether you run Debian on an old laptop or a water mill does not really matter if you network cards drivers are included default in the Debian distro, mine are not.

Always install the minimal version when you’re going to Virtualmin. The installer script for Virtualmin will install everything you need.

If you get the fully loaded 20.04 LTS you’re going to have far more baggage than you need. It can actually do far more harm than good.

They are cloud machine images, I don’t think there is an option for the OS installation type? Hence the question.

The point is it doesn’t matter. Whatever you’re on, always install the minimal install when you’re going to Virtualmin.

They are cloud machine images, not .iso’s

The Centos Stream is downloadable as ISO:
https://www.centos.org/centos-stream/

but
I dont find any obvious explanation as to the diff between stream and linux editions… this may be helpful: Contribute/CentOSStream - CentOS Wiki but I really don’t know for sure.

Just that I will probably not use it.

And as such, there is no option to choose minimal or full installation. Hence the question.

If you don’t know if they’re provisioned as a minimal or full install can you stop spamming the thread.

And as such, there is no option to choose minimal or full installation. Hence the question.

And that was my point that for some strange reason you keep ignoring: It doesn’t matter if you have a choice or not. If you’re going to be installing Virtualmin, they recommend you do the minimal install. Period.

So if all you have is the minimal install, you’re good to go. There’s no need to look for anything else.

Read that about 5 times and see if any of it sinks in.

Found the screen shot. Here it is: 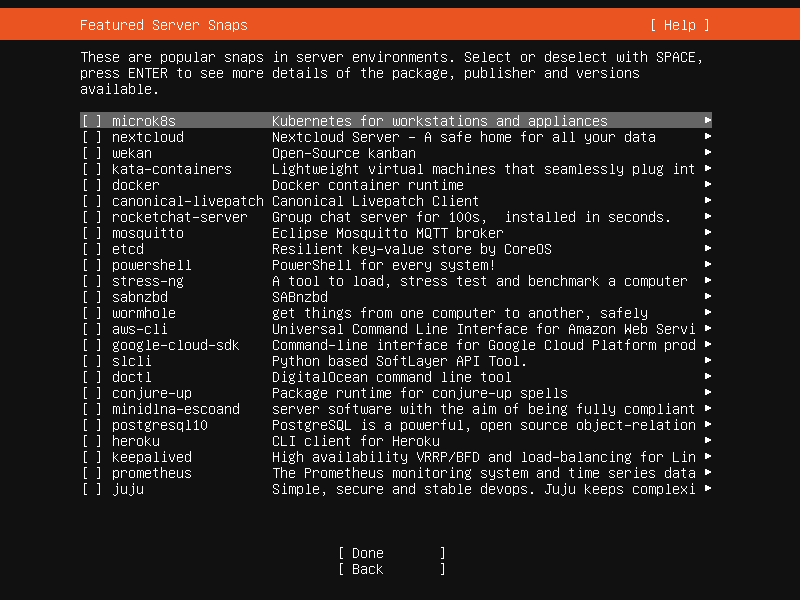 This is in every Ubuntu installer. Most people love to click everything and install it all because they think more is better.