Hello,
I am trying to bring a Non-Profit Food Distribution out of the dark ages.
I’m trying to do it on a shoestring.
Does there exist a nonprofit tier of your license? We are a 501©(3) Food Distribution Provider. (We hand out food to our community that we obtain from The Emergency Food Assistance Program (TEFAP), Care and Share, and other resources. ) as well as attempt to find resources and a hand up for individuals who may need it.

We were donated a VPS to house our CRM and other resources we need to further our grant writing and tracking of our constituents. I would like to make this easy for whoever replaces me, who will most likely not be so IT-oriented. I want to use Virtualmin.

What would you need a Pro-License for?.. Are you planning on running individual companies, or just hosting several domains?..

The net, org, and com of the domain myneighborscupboard.com I also want to host the CRM as a subdomain.

You can do all of that now…

Yes, @ilouie is correct. The free / GPL version of Virtualmin has all the features of the paid version except the reseller feature (and it has lots more items under Install Scripts) which @gjdunga you could do without and use the free / GPL version to accomplish all the things which you have mentioned.

Why don’t you install Virtualmin and take the help of the community to get started quickly: then if you run into any limits in the free / GPL version of Virtualmin, I am sure @Ilya, @Joe, @JamieCameron and the rest might consider it favourably if you point out a specific use case to support your request for a free PRO licence.

Indeed, the lay community might also contribute towards it via crowdfunding.

TY Calport. @gjdunga, if you like I can help you with the installation of all the things you require. I’ll donate that portion. TY

The first issue is that the scripts to be able to re-install WordPress are not available.
I can install it blindfolded (almost) I have to think about who will come after me, and think to the lowest common denominator. There are others, I will document in a bit.
I currently have it on a server and have used it many times for personal projects.

scripts to be able to re-install WordPress are not available

The script to install WordPress is available in the GPL as well as the PRO version of Virtualmin. This is via Virtualmin -> Install Scripts 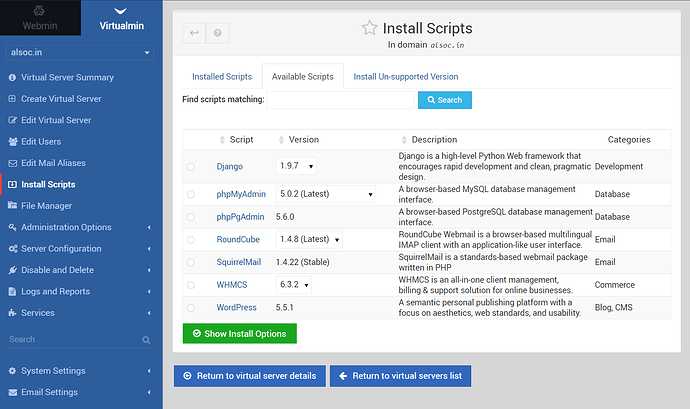 I am not sure what you mean by ‘script to be able to re-install WordPress’. Is there a re-install script in the PRO version of virtualmin which is not available in the GPL version?

You are right, of course, to think of those who will come after you and take over the project. To that end, virtualmin GPL offers the option to upgrade WordPress from an old version to a new one, as and when a new version is released. This too is done via Virtualmin -> Install Scripts. Is that what you meant by re-install?

If so, be assured that your successor will be able to keep WordPress updated merely by going to Virtualmin -> Install Script and electing to upgrade, even with the GPL version of Virtualmin.

I also need to setup a multi-device VPN.
Each constituent has to register or sign that they get a food distribution package.
I would much rather capture that at the end of the day in a database from someone signing a tablet. (The signature/registration is required by the government requirement) Rather than having to scan a page at the end of the day and having to OCR it, I’d rather be able to have that data come from tablets or even mobile devices. I would much rather be able to set up a script here in Webmin to allow/register a device. and that’s going to be much easier with a little help from the forums and the Virtualmin staff if we have pro…

I misspoke (mstyped?). I meant drupal.

Well, you will need the PRO version of Virtualmin if you want to install Drupal through Virtualmin -> Install Scripts.

The virtual servers which I host on Virtualmin GPL do pass PCI and I advertise as much - see https://vps01.indiax.com

You should be able to get the same result, maybe out of the box or maybe by tweaking a few things…

If they want pro everything then they should be ready to pay for it. The pro / non-free version of Google Analytics, for example, costs USD 125,000 per year, so a non-profit increasing its admin costs needlessly by a decision to go pro is something which should be reconsidered, particularly if you want to get into analytics.

Each constituent has to register or sign that they get a food distribution package.

In addition to Drupal, you could consider TikiWiki - see tiki.org - for this. It would be quite easy to set up such a system in Tiki, including the bit about tablets.

Stopping here before I go off-topic in this discussion which is about a free Virtualmin Pro license for a non-profit.

can you please mention how it’s going to help you ?

Please allow me to retract my request. The reasons I have stated above are not appropriate.