So in my ‘Account Plans’ I selected to have WordPress as the only script avail to install on this server. However, I went to create a new virtual server and, in addition to WordPress, I now have all the “Pro” Scripts listed as options.

Are you logging in with his credentials to see that? If you’re still on your root credentials you’ll see everything regardless of what you set up for others.

I am logging in as root. She also has ‘sudo’ access. I wasn’t seeing this when I created this server last month and neither is this present on the older servers that have not been upgraded with the latest Virtualmin updates.

I m not using the Virtualmin Pro but the the “Pro” scripts are now showing when I am installing a new virtual server. That really doesn’t make sense. I shouldn’t be seeing them and have not been seeing them in all the years I’ve been using Virtualmin. I have over 60 WordPress websites running on 6 different servers. Even when I installed the last server a month ago, I did not have this issue. I create Account Plans that hide the other scripts to make it easier for me to delegate creation of virtual servers. This issue is only on the 2 servers that were updated to the most recent version of Virtualmin/Webmin.

My point is: you can’t hide anything from a sudo or root user regardless of which version you’re using. Even if they aren’t displayed in the gui you can still simply launch them via the terminal. It’s really not going to matter if they’re displayed or not.

However, have you tried to install one of them on a test virtual server? If you’re not using the pro version they shouldn’t install so again it would be moot.

I’m also wondering if you might have inadvertently upgraded over the top of a pro version. Is that possible?

EDIT TO ADD: One other idea - have you tried going to Virtualmin / System Settings / Installer Scripts and disabling all the scripts you don’t want shown and then restarting Webmin to see if they all disappear?

As mentioned previously, these servers did not show the Pro scripts a month ago. This all happened after a software update from Virtualmin. I tried to remove the scripts and noticed that none of the “Pro” scripts are actually installed on the server but they still appear on “Available Scripts” tab even though they are not installed. This is the reason I believe it was done in error on the last update. You will notice in the screenshot below that the installed scripts are all disabled except for WordPress in the Account Plans. The disabled scripts do not show up in the ‘Available Scripts’ which is how it has been all along. I don’t mind if the Pro scripts had a separate tab (if this is a marketing campaign) but they shouldn’t appear in Available Scripts tab yet they are not enabled anywhere in the account plans.

Oh wow. OK, I completely misunderstood what you were talking about.

It’s not a bug, though I don’t know that I like it, as it can be confusing.

@Ilia added this to make it more clear what’s available in Pro, if you upgrade. I think he borrowed the idea from the WordPress ecosystem where lots of modules advertise what you get if you upgrade to the paid version in the UI itself. It’s probably a reasonable marketing tactic, but I’m not comfortable with advertising confusing users, so something has to change about the way it’s presented (but, we desperately need to make more sales of Pro in order to keep the lights on, so the motivation for more overt marketing is clear and hard to argue with).

I’ll talk to him about how we can make it more clear what’s going on.

I think you’re asking the right question. I have always wanted to know the additional scripts available in the Pro (and have previously opened a thread on it - which was answered). It is nice to always have the Pro features visible to entice the upgrade.
My suggestions would be to have a separate tab next to available scripts that lists them all and also includes a link to upgrade to the Pro version.
Happy to see Mautic and Motomo in the list - Will upgrade just for those 2.
Can you also add Invoice Ninja?

@Ilia I’m surprised, you are web dev and with current framework you can leave this in GPL version and previous, just bellow do line and button saying something like ,see all scripts available in pro version, and when user click it it will roll out html responsive table with all scripts…

I was confused too my self eh…or add red thing available in pro only on current code.

or make YouTube about difference regards each pro Vs GPL features in separate videos tag virtualmin website in it and basically farm links.

@Ilia same you should add request support from virtualmin staff button somewhere… directed directly to you guys …it could be added next before log out button, pro users and GPL users as well… that should been done long time ago. I’m not critical to anyone but this will boost you guys same forums, add that link somewhere within virtualmin menu or button, you know create new menu called support and sub menu linked to your packages, emails, forums or whatever… I hope so, I’ve inspired you and someone would actually look at it…have great day.

@Ilia feel free to nagging me, I’m after night shift today (UK) time but on my profile you will find call button for my telegram or signal. call me anytime.

I remember adding it.

That not yet, I think.

Can you also add Invoice Ninja?

Yes, if it’s a good one and well supported.

just bellow do line and button saying something like ,see all scripts available in pro version, and when user click it it will roll out html responsive table with all scripts

Yes, I was thinking about something like that. Thanks.

I don’t like this idea, as we’re primarily developers and not tech support. It’s all about self-explore first. There shouldn’t be that easy way to ask for help directly from us.

Adding few links to the Dashboard with Virtualmin Forums and Buy Pro sounds good to me.

I’m not sure how hard it would be to program this, but how about a small popup or flyout window?

Or you could make the area in the header an advert panel to display the advantages of Pro on each area of the application in much the same way that Wordpress does.

Example: I’m on my GPL and go to install a script and once that panel opens a small window out to the side pops up with “Did you know you get 10 times the install scripts with Pro? Click here to find out more” and then that link goes to the page that shows you all the scripts included with pro.

And you could do that with any area where Pro has a good number of additional advantages.

It’s a GPL version and provided for free. I certainly wouldn’t mind it and who knows? There may be something in some section of Virtualmin I stumble upon where that advert might talk me into it simply because I didn’t know that feature was available.

Edit to add a couple screen shots - You just bump the info panels down and add a small header panel above for adverts like this: 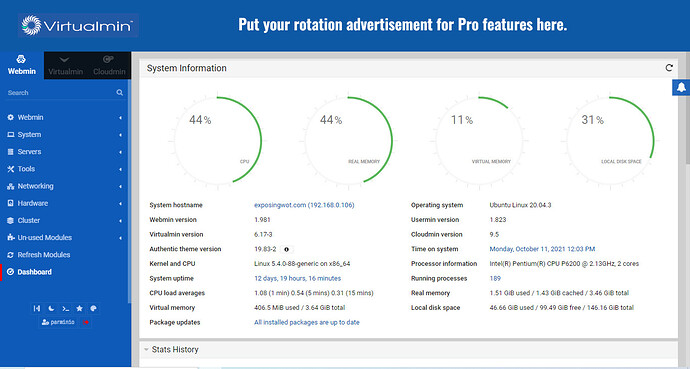 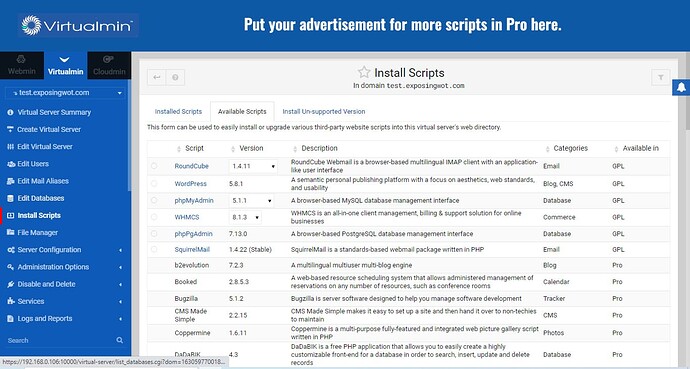 Edit the edit: Please forgive the fact I took my first screen shot from Webmin instead of Virtualmin. Haven’t had enough coffee yet this morning.

before log out button, pro users and GPL users as well… that should been done long time ago. I’m not critical to anyone but this

Yes! Mautic and Motomo are included in the Pro list.

Invoice Ninja is well supported and has just released version 5. I’ve been using it for billing for the last 4 years. I wouldn’t mind being able to setup it on a Virtualmin server for easier management in a shared environment.

Right now, I have Mautic and Invoice Ninja on separate VPS machines simply because I had trouble setting them on a single server (don’t know how I managed that but failed on a shared server!!!)

I think the best way to get more upgrades to Pro would be to understand who is using Virtualmin, and how they are using it. In my case, I do not sell web hosting exclusively. I am a web designer/developer. I use Virtualmin to host mostly free websites for my web design clients.

For clients that opt to upgrade to the managed services, I tend to move them to a Vultr VPS without Virtualmin or any other web panel. Practically, I am using about 10% of Virtualmin GPL capabilities.

Personally, I believe modules like Cloudmin and Usermin should have been an upgrade to “Pro” together with the additional scripts for folks who are selling web hosting as an exclusive service. This is definitely a positioning play.

Four years ago, when I started exploring hosting on my own (I was fed up of web hosting services that would go down for hours or days), most WordPress web designers were still relying on the cheap web hosting services like GoDaddy, Host Gator, etc. Now, most have discovered services like GridPane, RunCloud, Cloudways, ServerPilots, SpinUpWP, etc. Virtualmin to me serves in a similarly capacity to these services, however, Virtualmin is Open Source and “Free!”

I believe that many of these web designers/developers would actually gravitate to Virtualmin Pro if the following were available:

I know there are those that sell web hosting services but I can’t speak for them and their needs.

FYI, I am working right now on adding an API to first, present a Pro feature and then hide it nicely for a page, across UI.

Great idea to have this promoted more and highlight the benefits of pro. I mainly or partly went with Pro because of the scripts. Point and click - just wanted things to work. Personally, the more options/features the better. Although I appreciate somebody has to maintain it. But letting the Pro owner decide what to enable/disable - great direction for people like me. Just a note that if it hadnt been for the GPL being so great in features, I would not have upgraded. So a slimmed down or lack of features in order to encourage an upgrade isnt the way forward.