Possible bug. If the system uses an outdated version of Usermin then its version is highlighted in pink. However this is not the case with the Webmin version - see this screenshot 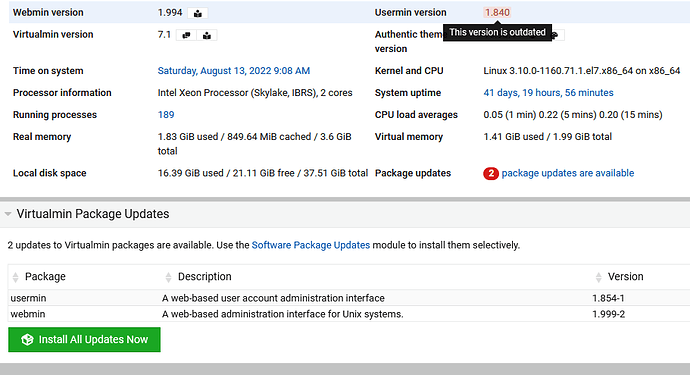 All it does is update the repos.

It’s still a bug that it’s highlighting an outdated version when a newer version is not available via the currently configured repos. @Ilia can you fix it so Usermin is not complaining about being out of date when it is not?

I wish I could reproduce it @Joe!

The problem is that Usermin 1.854 is not available on the system but it says that Usermin is outdated? I don’t see how it’s even possible?

Can you please double check on that or grant me an access to that system?

The problem is that Usermin 1.854 is not available on the system but it says that Usermin is outdated? I don’t see how it’s even possible?

It’s obviously checking something other than the package manager. It should never do that (I accept that I’m not going to convince you and Jamie that it should literally never happen no matter what, but on Virtualmin systems it really should never happen).

@Joe, I think, it’s some kind of misunderstanding here and we are not on the same page about what this feature really does.

Notifications about packages upgrades (Webmin, Usermin and Virtualmin) are not dependent onto anything but Virtualmin repos themselves, and can potentially pop-up only when those packages been added by you to Virtualmin repos.

Installing latest packages upgrades is important to maintain security of a system!

Also, having a dashboard notification about outdated Webmin, Usermin or Virtualmin and not having those packages updates available for installation in package manager, should be a clear indication about that something is wrong, and that the issue should be addressed as soon as possible!

Unless notifications depend on a remote server (i.e. virtualmin.com), it’s pointless. It will just mask a problem.

There have been plenty of users with misconfigured and outdated (old-style, abandoned) Virtualmin repos which would not known about that a new upgrade is available. I solved this problem.

I really don’t understand how this can be bad.

Also, latest versions of the theme let’s you click the label with outdated version and be taken to the product Virtualmin News section, where they can read about what’s new in a package which hasn’t been installed yet.

Installing latest packages upgrades is important to maintain security of a system!

I’m not discussing whether updates are important. I’m saying updates should be detected (only) based on what’s available from the package manager.

I assumed we were seeing updates being detected by something other than the package manager because that was a problem that persisted for years. But, I guess we’re seeing something else here.

The problem is that the highlighting is apparently detecting via a different mechanism for Usermin and Webmin since updates are available for both, and only Usermin is highlighted. If they’re both detecting based on the package manager, and they both have packages available for update, shouldn’t they both show highlighted?

Yes, this is what I was attempting to convey in my original post.

Possible bug. If the system uses an outdated version of Usermin then its version is highlighted in pink. However this is not the case with the Webmin version - see this screenshot

I think I see a problem here, which is Webmin minor (release versions) are not properly handled. I will look into fixing it!

This will be fixed in the upcoming release.

Why is there version logic at all? Ask the package manager. It already knows if there’s a new version, there is no reason to do version math.

Why is there version logic at all? Ask the package manager.

Package manager will not know if Virtualmin repos are misconfigured (locally). We have a lot of old /centos/ repos, which stop people from upgrading.

FYI, I have also discovered a bug where initial request to check for remote packages versions was made on the initial call to the Dashboard. This could slow things down. Will be fixed on the next release.