New replies are no longer allowed

Every now and then I hit this problem with this support forum: I cannot add solutions or comment to existing topics because they are closed after 8 days. That means it is forbidden to help the community, to help between us, also a kind of an arrogance that any answer provided by the support team is the supreme one and no one will ever encounter a similar but slightly different issue that the answers won’t apply for. With the server broken for a particular reason, no one will have time to wait for a reply, but will gladly share the discoveries on a community forum. Or maybe stackoverflow’s style taught us wrong.

“This topic was automatically closed 60 days after the last reply. New replies are no longer allowed.”

This topic see below to!

This topic will close 2 months after the last reply.

existing topics because they are closed after 8 days.

You can however open a new topic with link to that old one, so one is knowing the about , problem is topics so old makes no sense to open them normally it is solved after 60 days no reply’s or? 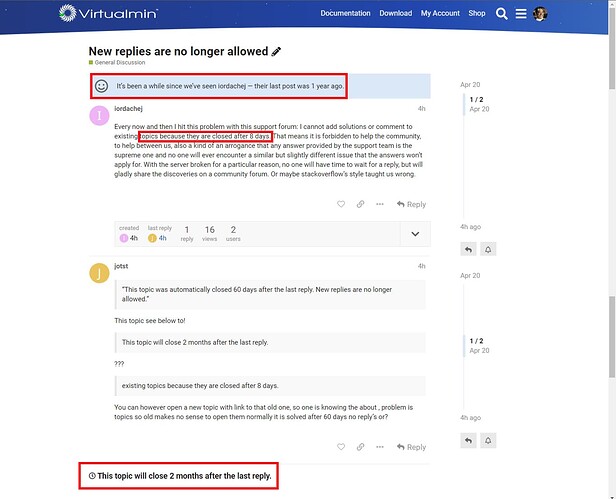 This has been discussed a few times.

The problem we’re trying to solve with closing topics in public forums after 2 months (or a shorter time once a topic is marked “Solved”) is people reviving old threads with new, often unrelated but with similar symptoms, problems. It’s impossible to follow threads that go off-topic and it is impossible ever know something is solved when a bunch of people are talking about similar sounding, but possibly entirely unrelated, problems.

The alternative is much more aggressive moderation, i.e. removing comments that try to make zombie threads or try to hijack a thread to talk about somebody else’s similar seeming problem. Deleting peoples comments seems to make people angrier than just requiring them to make a new topic. I’m trying to maximize happiness.

I don’t have perfect answers on how to maximize happiness, but for my own mental well-being, I need to not see people reviving old threads with new problems every day, and I need threads to remain short and focused in order to be able to help. If I could convince people to stop making zombies and changing the subject some other way, I would do that. But, I tried via guidelines, gently asking people to not change the subject repeatedly, etc., and it didn’t work.

Regular posters are mostly fine, but a lot of people find the forum via a web search for a search term or phrase that is pretty generic…they then decide that the similar error that started a topic is the same problem they have, and start asking their own questions at the end of the thread, with no regard for what went on before. Those kinds of follow up make me unhappy and confused, and since I spend a lot of time here and I don’t like being unhappy and confused, I try to stop it from happening.

We don’t have a community anywhere near as large as StackOverflow. SO has literally millions of users, and very advanced voting and moderation systems (and they’re occasionally pretty harsh/strict and arbitrary in their moderation, far more than we are here). I try to read every post and every comment, and respond when I can do so quickly. I can’t do that if half the threads make me angry because they are confusing and long and disjointed. If I were paid for doing all this reading and responding, I’d probably be more easy-going about it…but, my time here is voluntary.

If an answer that someone marks as a Solution is not actually the solution, the topic creator can follow up and we’ll unmark it and try something else. Usually something only gets marked as a solution if somebody is pretty darned confident it will solve OPs problem. If it doesn’t solve some future person’s problem (but it did solve the OPs problem), then we’re not talking about the same problem, are we?

Creating new topics is free and encouraged. If the answer that solved it for the original poster doesn’t solve the new problem, it is a new problem! There is no rule against posting a similar issue as previous threads, if the threads before didn’t answer your questions. In fact, that’s how I need things to work, if I’m going to come here every day and try to solve as many problems as possible as quickly as possible.

First, thanks for your detailed point of view because it shows you do want to make things right. I sense that it is a difference between the way I see the forum vs how you see it: I see it like a support-but-community-based while you’re seeing it as a ‘bug-tracking’, which I can understand because I work in software industry too.

I think the best solution would be to open up the comment section attached to each answer (again, based on SO’s style) where one can add details or solutions to an issue that has been marked as solved. That would not modify the thread, but would allow some interactions with the existing content.

The approach of adding a new topic every time when a similar problem (possibly with a different solution) wouldn’t work as well because, as you mentioned, user often land on the forum as a result of a search and every time they come they will land on the same old (indexed) pages first. So instead of keeping together the discussion about a particular issue, we’ll end up talking about the same things in several threads. Now that’s a confusion and a frustration for someone looking for answers.

Lastly, psychologically, the users find easier and more appropriate to share their discoveries to a problem with the ones that already mentioned it rather than opening a new thread to post the problem first and its solution. It is actually kind of weird to to that.

astly, psychologically, the users find easier and more appropriate to share their discoveries to a problem with the ones that already mentioned it rather than opening a new thread to post the problem first and its solution. It is actually kind of weird to to that.

Hmm i think no.
While if something is solved it should be clearly marked with the howto then it makes no sense to re-open or extend such topic with same problem.

So if solved then a NO.

If not solved then it make sense for me what you are writing, but then how long after in time, while versions do change, so more complicated if some 3 or more months later extend / reopen after several version updates / upgrades could make a mess to support and understand what al is done.

There i suggest to extend with a link then to a new to open new topic and cross link in new topic to the older one!

For a guy that pops by once in a year you sure do have a lot of opinions on how this place should be run.

Hi I did dm to @irodachej and seems to cannot find my message send to him and you guys… where is it?

If he react you see.

As a paying customer I do have some expectations, yes. I did, actually.