My firewalld isn't working - what is the correct FirewallBackend? Please check yours for me?

Gaaaah. No wonder I’m having trouble with attacks…
I haven’t touched FirewallD at all. My firewalld.conf has this final line: FirewallBackend=iptables

What should that line in firewalld.conf say?

Please … could someone simply do this?

Use this site to check if any ports are open

Port Checker is a simple tool to check for open ports and test port forwarding setup on your router. Verify and diagnose connection errors on your computer.

I know how to deal with ports and such.

My question is what is the correct config information for the VirtualMin default (FirewallD) firewall?
Mine is not working at all… presumably because it is set to use iptables but iptables isn’t installed (and there are many docs here saying you get to choose between iptables and FirewallD… but FirewallD is the default.)

If nobody knows, I’m confused.

This is default public rules, why do think its not working? 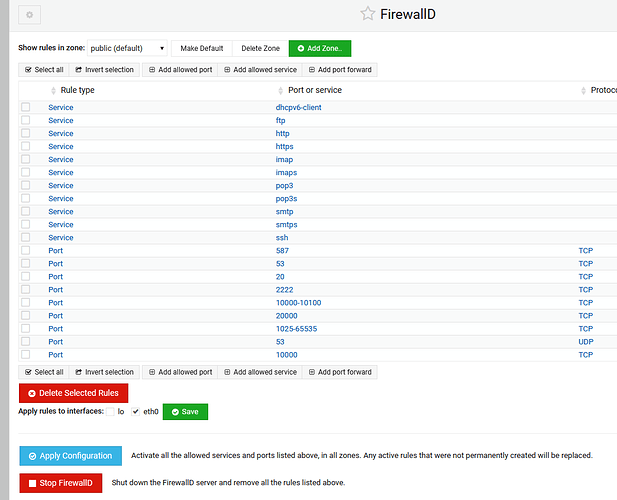 Just because the GUI lists some rules doesn’t mean they are actually functioning in a system.

(At breakfast yesterday, a sysadmin friend described a scenario where a crucial tracking report was giving bogus data… because the underlying API had been replaced. It was giving old bad data NOT connected to an actual system.

It was an entire year before anyone noticed!)

So, what does tail /etc/firewalld/firewalld.conf look like on your server… and is iptables also installed together with firewallD?

fail2ban blocked IP’s are still getting through

fail2ban works on mysystem because it blocked myself once and I had to use the unblock command to alow a pop3 connection on my IP.

iptables also installed together with firewallD?

what does tail /etc/firewalld/firewalld.conf look like on your server… and is iptables also installed together with firewallD?

FirewallD is just a front end for iptables/nftables. It does nothing on its own.

What is the output of the following commands? Do you have iptables package installed?

Thanks, @Ilia … That’s the sense I am getting. I was headed down the wrong path by statements such as this one:

I now understand that statement is misleading at best.

So I do have iptables installed. That confusion continued as I searched for a solution to my issue:

Here’s my new understanding of the reality:

And for diagnosing and detecting any issues, here’s how to temporarily log banned packets (without logging ALL drops. You don’t wanna do that

And now, to replace a rule with a logging rule

(After all that, it appears I may have found a bug in fail2ban. It does block for a little while but the bantime specified is kinda-sorta ignored.)

You’re right, the Webmin Firewalld module is pretty limited (and Firewalld is kinda confusing, I have to read the docs every time I touch anything…I wish it weren’t the best option, but it pretty much is, at least for our needs and our users most common use cases). I’ll make a ticket about adding support for showing direct and rich rules (I hate that they don’t have a simpler abstraction for something as simple as blocking an IP address, too).

Worth noting that not all systems use direct rules (this is the first I’ve heard of it, but I trust you as it looks like you’ve done your homework…on my CentOS/Rocky 8 systems fail2ban is using rich rules). I don’t know what the difference is, but the firewalld docs suggest direct rules should be a last resort after rich rules. I guess direct rules are at the lowest level of abstraction.

Ticket is here: Would be nice for Firewalld to be able to list rich rules and direct rules · Issue #1622 · webmin/webmin · GitHub

Thanks, @Joe … more homework still to be done.

UPDATE: Rich Rules absolutely can work with ipSets … not sure why F2B uses direct rules (unless it’s a carryover from pure iptables.)

(I hate that they don’t have a simpler abstraction for something as simple as blocking an IP address, too).

Many of us, VM users would highly appreciate that - a simple way to add an IP or two on a permanent ban.

I would highly recommend using CSF firewall. It even comes with a Webmin module. It is well documented and an excellent tool to limit or stop attacks. I have been using it for years now.

If you want to block an IP or a CIDR block it is as easy as adding into this text field.

When you want to limit access to your server to only a select country on countries you can do it too.

There is so much more you can do using CSF firewall. I have stopped using Fail2ban, etc after discovering this amazing tool. My server has 16GB of ram. I have used it for servers running with only 4GB of ram and it works well too.

Didn’t know VM supports CSF. I’ve only used it on cPanel servers.
Will check that for sure.
Thanks!

Also some configs for the logs needed not to have them “full” in no time, in manual you can find those.

I also have ftp ports and ftp disabled at vmin box.

There is very good support for CSF in Virtualmin/Webmin and Authentic Theme. But, I don’t like that sort of firewall and don’t recommend it on servers. It’s very easy to get bogged down in the minutiae of complicated rules that don’t make sense on a web server. But, Ilia likes CSF, so there’s good support for it.

But, Ilia has been doing a lot of work on the Firewalld module, so it’s going to get some upgrades in the next Webmin release.

@jaldeguer , @ramones79 , @joe I have learned some lessons about use of “permanent” IP bans: you really do not want to do this. The issue: IP assignments are not forever.

I blocked some ranges due to flooding attacks from certain parts of the world. So nice.
Then later, legitimate sources could not connect.
Why? In the meantime, those IP blocks changed hands and now are used by 100% legit sources.

This is why dynamic blockers such as fail2ban are needed… particularly in the upcoming 0.11 version, with auto-scaling block times.

Having set the country blocks in my experience has significantly reduced attacks. In the years of using CSF, I still have to encounter the problem you described. What’s nice about having this feature it’s up to the organization or individual to enable or disable it.

CSF Firewall comes with a feature called Login Failure Blocking if you do not want to use permanent blocking. 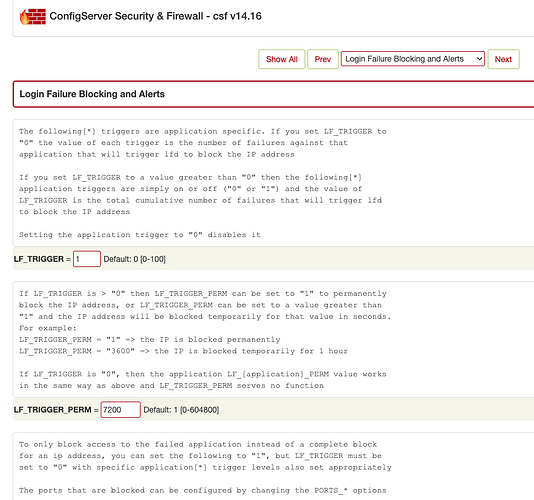