I migrated my server this past Sunday and updated the Name Servers at the registrar but Google, Amazon and Microsoft 365 have not resolved the DNS for all the websites except for two.

Although the DNS records of all are the same.

How long does it take for the DNS to resolve for these companies? On DNSChecker.org about 4 - 5 DNS servers worldwide are not resolving the websites.

I just attached two pictures of different DNS records but both are relatively the same. The .net is seen by every DNS server including Google but the .com is not. 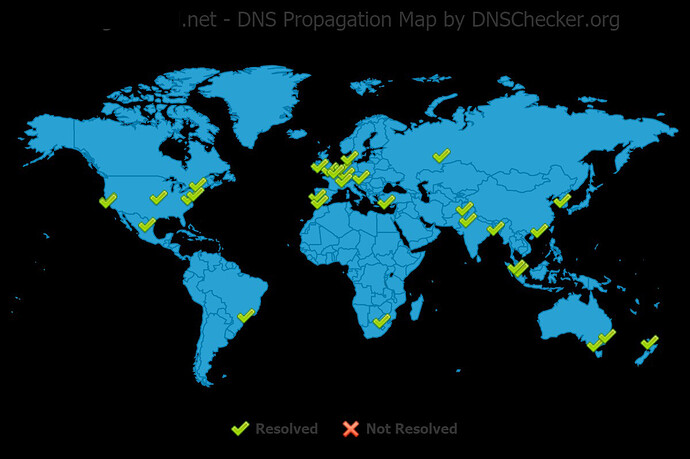 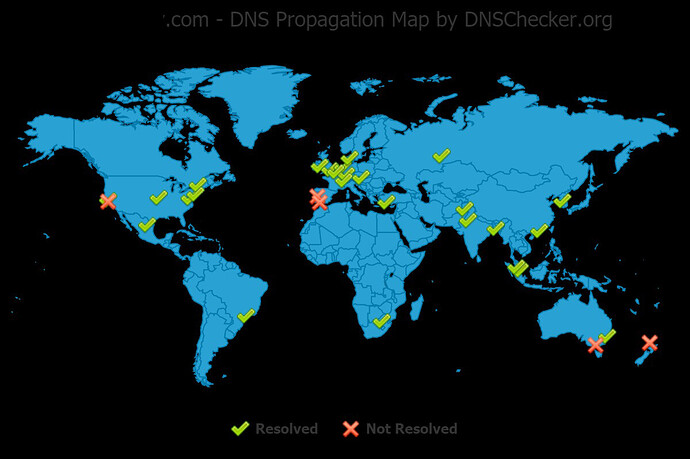 Usually they’re pretty quick about it.

If you still have the old server online, you can make A entries pointing to the new one.

I typically shorten the TTL’s to something absurdly low like 600 a couple of weeks in advance of a planned migration, and then leave the old server up and playing traffic cop pointing to the new one until it’s not getting any more traffic. That speeds things up quite a bit.

Thank you for the response. I will change the A entries to point to the new one but they dont even see the old one since I took down the main domain name that held the nameservers from the old server.

On the new server I updated the TTL to 30 on all domains. Let’s see if that pushes it.

Could this be part of the problem?

It’s not best practice. Generally the hostname shouldn’t be a public site. I usually put something there because it’s better than a 404 or 403 or whatever goes there if you don’t put something there. But it would have been better to call it server.example.tld or something like that.

But I doubt anything will explode.

Also, the error is caused by a bug that Joe said said should be fixed shortly, if that’s the same bug he’s talking about.

EDIT: Here’s one of mine: https://server1.geekonthehill.net

@RJM_Web_Design I was unaware there was a bug regarding this.

See below for orion.[example1].net and [example1].net domains both are the same domain name but have two different Virtualmin server accounts on the server.

My guess would be because you migrated the subserver to a server with the same hostname.

Okay. I tried something and it worked. But that may mean something is configured incorrectly.

I decided to add the hostname (which is also a nameserver) into the registrar. I added it to a test domain that is not setup yet and it worked. Google and a few remaining stragglers found it fine.

Now the question I wonder is… Does anyone else setup their hostname and then have it show in the Virtualmin as a website (Virtual Server)? If so how is yours configured compared to mine above?

I have a website on the main a domain such as example.net but I used orion.example.net as the hostname.

I’m really not sure what you’re talking about by adding the hostname to the registrar. Typically you would add the nameservers, and they would do the rest.

The simplest way to do set this up, in my experience, for the server to not even share a domain name with any of its hosted sites. Then the server has a DNS entry all of its own rather than being entries in one of its own hosted domains. It also simplifies things if you want to move or shut down the shared domain, and prevents problems such as you’re having now.

Now… That’s not to say it has to be that way. It’s just a simpler and more efficient way to do it.

@RJM_Web_Design Sorry for any confusion in my last message.

I am new to Virtualmin used to be on CPanel and always had it setup as nameservers and hostname using an active website domain name. I was assuming it would be the same as it was over in CPanel but then noticed Virtualmin does things a little differently. Regardless I have all websites visible by Google, Amazon and Office 365 but still wouldve liked to use primarily the nameservers I had.

But like you said I may have been better off creating a separate domain name just for hostname and nameservers however all my clients are using the nameservers and would have been a pain to change them over to it.

cPanel does a lot of things strangely.

Choosing an independent hostname domain isn’t really panel-dependent. It’s easier in general for the hostname to not share a domain with a hosted site, especially when it comes to moving sites, shutting down sites, migrating to new servers, and so forth.

It doesn’t matter as much if the server hosts only one site. In that case you could just build another server (and even give it the same hostname if you want – none of it is “official” until you re-register the nameservers), and migrate that one site over to the new server. Change the glue entries, point DNS from the old one to the new one until it propagates, and take the old one down when it’s not getting any more traffic. You presumably have access to the registrar for that one domain, so no big deal.

It gets more complicated when you’re hosting other people’s sites, or even multiple domains that you personally own.