I am having a range of issues with my Virtualmin installation on Debian 10. I have done a vanilla build on my VPS (hosted by OVH) which generated defaults for the server name and dns that I did not want. I followed this guide from Digital Ocean (https://www.digitalocean.com/community/tutorials/how-to-install-virtualmin-with-webmin-lamp-bind-and-postfix-on-ubuntu-16-04) even though it is on Ubuntu and I am on Debian, it is all linux so works. The only difference for my installation was the editing of /etc/network/interfaces.d/50-cloud-init.cfg which only listed the default dns server from OVH. I deleted it and replaced it with my own listing (my primary Nameserver and the secondary Nameserver from OVH)

# This file is generated from information provided by
# the datasource. Changes to it will not persist across an instance.
# To disable cloud-init’s network configuration capabilities, write a file
# /etc/cloud/cloud.cfg.d/99-disable-network-config.cfg with the following:
# network: {config: disabled}
auto lo
iface lo inet loopback

Despite the opening remarks it has persisted in the file. I do not however think the file is being referenced by virtualmin.

I installed Virtualmin plus LAMP using the official install.sh script and after the post install configuration I was able to access Webmin and virtualmin.

PROBLEM 1
My first action was to check settings. When I go to Networking:Network Configuration:Network Interfaces, things do not seem right. The network interface appears to be set for IPv6 which I have not done and when checked via a lookup service it is an unknown address. No idea where it comes from. I will replace it with my own IPv6 in due course. 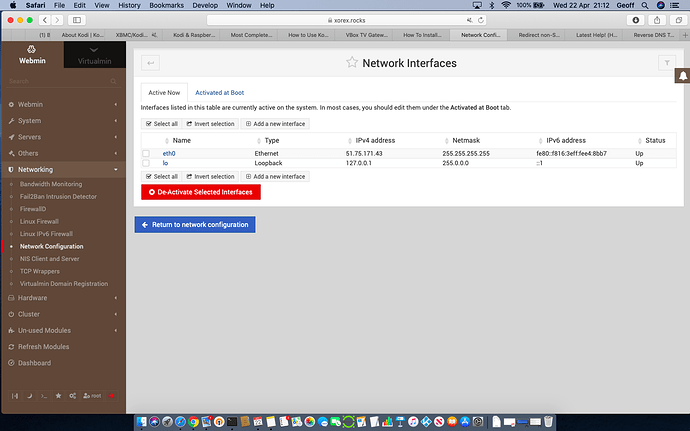 Then Networking:Network Configuration:Routing and Gateways looks fine for IPv4 but again it has installed an IPv6 entry that is unknown. 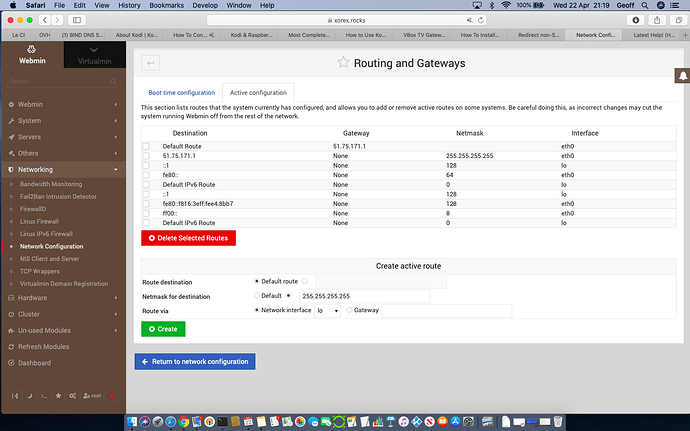 Networking:Network Configuration:Hostname and DNS Client give the correct hostname (Xerxes) but the dns listing does not show the servers I set up but the default server from OVH. If I delete it and add in my own server it remains until I reboot and then it resets. I have searched the entire file structure of my server for this IP address but cannot find it so I assume it is to do with the cloud configuration? How do I change this so that my servers are shown? 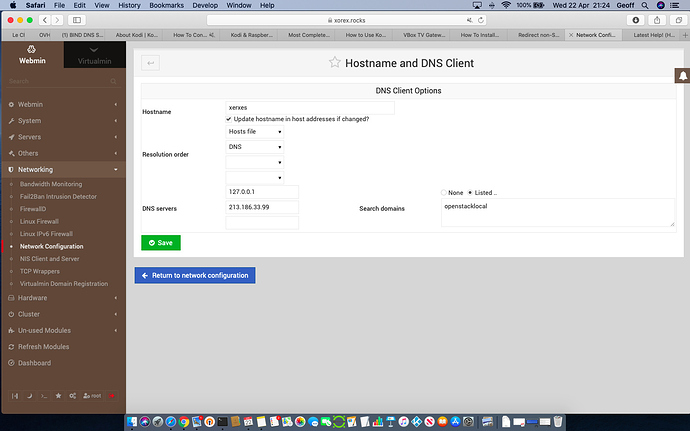 Networking:Network Configuration:Host Addresses looks OK but I am posting it for completeness. 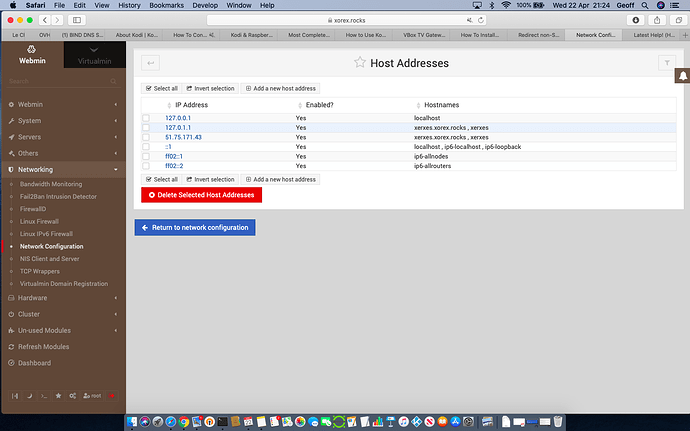 Can someone explain what I am doing wrong?

PROBLEM 2
I then setup my virtual server xorex.rocks and a subserver ns1.xorex.rocks to be the primary nameserver. The installation went fine for both and I was even able to set up my let’s Encrypt certificate for xorex.rocks. It did not work for ns1.xorex.rocks but I am going to assume it is a dns issue for now and wait a couple of days for propagation and try again.

Part of the installation process was to generate the dns zone and the process showed it being done and confirmed it. However it is not shown in BIND: 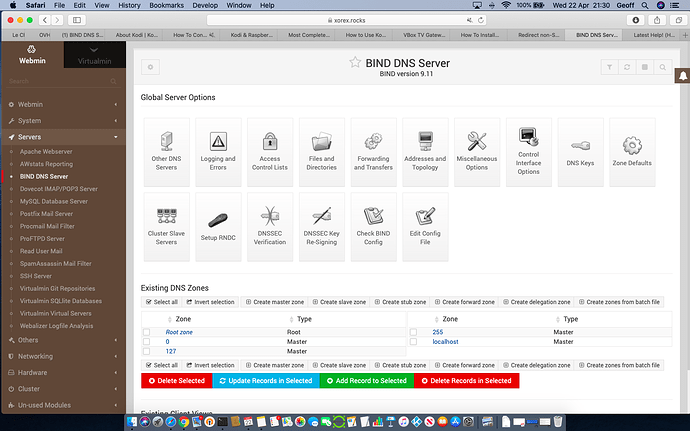 /etc/bind/named.conf.local lists the zone. In addition, /var/lib/bind/xores.rocks.hosts exists and has complete entries for both xorex.rocks and ns1.xorex.rocks. If I try to regenerate the master zone in BIND it tells me I cannot because it already exists. This has to be a virtualmin or Debian fault doesn’t it? I cannot edit the zone through webmin if it is not listed and linked.

Can someone tell me why this has happened and how to overcome it please? I am stuck (that is I do not want to make further changes) until these two issues are resolved.

hi, well I understand what linux is linux however debian is different from ubuntu… I can tell, I’ve used ubuntu in past for few years as main driver for desktop and did try it many I mean many times as servers - and main differences are in configs. I am now using years debian on servers and pc-s as I found ubuntu problematic and hence kind of somehow unstable.
Configuration on debian is mostly without any changes as debian stays closed to source as it is possible while ubuntu is very different in this. Regards the servers its very different.

I think installing virtualmin on debian, you should run on fresh distro of any kind install.sh and keep it all to default configuration, then finish install via with fine tuning via virtualmin gui.

Sorry I can’t help, but I am keen for a solution to the BIND issue as I have the exact same issue.

I’ve had a little extra time on my hands of late, and I have reinstalled several times now a fresh Debian 10 install trying different things each time to fix, and I’m still having the exact issue you describe with BIND.

As I side note, I had a running and perfectly working Debian 10/ Virtualmin/ BIND server for a long while now and it was only recently I noticed my master zone disappeared, which led me down the reinstall to try and fix it road. (Non production server, just learning). So maybe a recent update has caused the issue ¯_(ツ)_/¯?

Hi @unborn, I think you can see why I have not contacted you yet!

As with @reeza , this is a vanilla installation. All I did was set up the host name and dns which may give connection problems but would not impact the bind setup (well I don’t think it would).

@reeza, like you this is a non production server I am trying to set up so it works flawlessly before installing websites on it. I know when it works it is great but ironing out these issues is a real frustration. Hopefully someone will enlighten us.

More on the BIND issue. As I cannot access my zone via the BIND interface I manually amended /var/lib/bind/xorex.rocks.hosts and added the server name entry:

The automatically set up (but hidden) addresses such as m. ftp. mail. webmail. all respond to a ping but xerxes. does not respond so either BIND is not recognising the insert (I doubt it) or the dns setting is not picking up this change as it keep reverting to the cloud(?) generated dns reference when I reboot. How do I turn off the cloud setup or amend it so it works properly?

Searching the forum suggested changing the interface setting from DHCP. So I have done so and used my fixed IP address and net mask. It seemed to upset the server as I had to reboot it from my OVH interface but once rebooted I can see the change has been accepted but that the dns server has once again reset to the dns server of the host OVH.

I have even tried

in /etc/dhcp/dhcpclient.conf and that gets overridden on reboot.

Rebooting the server overwrote the file to this;

When I run a status check on Bind I get this;

None of these entries (esp. the IPv6) are to do with my settings. The clue appears to be in the line;

Where the server appears to be using the OVH preset which as I understand it should be limited to a single use.

My problem is I do not now if this Ian OVH issue or a problem with Virtualmin. If it is Virtualmin they will not help me. So, can someone tell me if this is a Virtualmin problem and if so how do I correct it to stop the vendor preset please?

How do I sort this out please?

From what I read is, that OVH is a tad annoying with networking since they dont offer the full spectrum to you.

In addition, they never respond to tickets other than send a message that I am responsible for the server even when I query their setup!

I am dumping them as they are the pits. French company with French customer service (that is, non-existent).

Have set up and am running concurrently a new server at xtcinxs.site (identical setup). However it too is having similar issues and I am just testing out their customer service levels.

Well technically they are correct with that statement. It depends if they are nice and want to bother with customer-related stuff.
Personally I would do it similar, but a bit more open for customers-related issues.
I can understand what you mean, but that should be said.

Carson, do you have any idea why the BIND server is not showing the zone for my domain? The zone file exists but it just does not show up in BIND.

The zones appear in /etc/bind/named.conf.local
The zone data appears in the respective file in /var/lib/bind/domain.name.hosts

However, the bind server is now showing them. Is this a bug in Virtualmin or Debian 10?

If I recall that correctly, its more a cache bug.

sorry Carson, my spellchecker interfered again. I said Bind is now showing them and it should have read not showing them. I cannot access the zone to edit it and even a manual change to the zone file is not being picked up by Bind. When I finally resolved the Hostname issue I added xerxes.xorex.rocks IN A 51.75.171.43 but dig cannot find that reference.

I am really stuck. Joe, can you help please?

I have even tried this instruction that I have noticed in the original post:

# This file is generated from information provided by
# the datasource. Changes to it will not persist across an instance.
# To disable cloud-init’s network configuration capabilities, write a file
# /etc/cloud/cloud.cfg.d/99-disable-network-config.cfg with the following:
# network: {config: disabled}
auto lo
iface lo inet loopback

But it makes no difference. Vendor presets are still enabled. However the error messages have changed and are showing my dns listings this time.

But the dns record still shows the wrong listing. Also disabled all cloud initialisation settings and rebooted and STILL the wrong dns comes up. What on earth is causing this?

Interestingly, although it is showing my dns server as 213.186.33.99 it is now responding to ping on xerxes.xorex.rocks so is it possible that the zone files are finally being read properly but webmin is not refreshing the information in the network configuration pages? Carson raised a possible issue with caching? How do I flush the cache to see if that is the problem?

It was written by Joe several times.
The DNS replication is depending on some settings by your system as well.

Which settings and where please?

Like I said, I dont have an issue with telling you all the infos but it will help you more if you read about it first.