I’m trying the new Virtualmin 7.0 Beta on a Debian 11 Server. So far everything is running actually great. I just found out, at least on my system, when I do a reboot, all my IPv6 addresses of the servers are not going to allocate automatically to my eth0 device.
Going to Webmin → Network Configuration → Network Interfaces, I can see these IPs allocated to the eth0 device in the “Activated at Boot” tab. Switching to active now, those are not all allocated, just the default ::1 IP.
Switching back to the “Activated at Boot” tab, going to the eth0 settings, and just click on “Save and Apply” all IPv6 IPs are getting allocated to eth0.
I don’t know at the moment where to look for to get this issue fixed

Maybe anyone from here can help out?

Thanks already a lot upfront.

As you go to Networking ⇾ Network Configuration: Edit Bootup Interface page is Activate at boot? option set to Yes?

yes, it’s activated. At least it says under Active “yes”

The strange part is that under the “Routing and Gateway” tab, those IPs aren’t visible on the active connection tab.

The strange part is that under the “Routing and Gateway” tab, those IPs aren’t visible on the active connection tab.

I would assume that if you configured static IPv4 and IPv6 addresses for the interface, and had it activated at boot, it would work as expected: 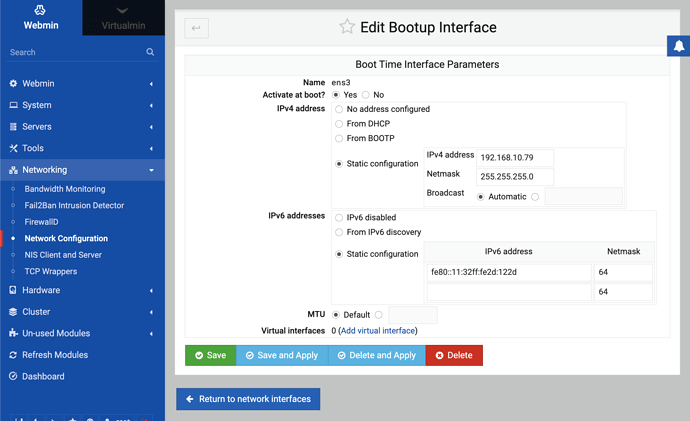 Please make sure to have a backup of /etc/network/interfaces file before making this change and that your server is accessible via a console.

thanks a lot for your answer.
Yes, everything is actually configured like in your Screenshot.

I was looking as well these days in my interface’s config file, but I haven’t found any errors in it.
It looks like more or less the same as on my Debian 10 production server.

Not sure if maybe the IPv6 short addresses(1234::100) make these problems. I’ll try to change it now and make a test again. → No, no change. I’ll try to reinstall the server, something is not working properly there I think. I think it’s not even a Virtualmin “error”.

Thanks a lot @Ilia for guiding me into the right direction. And I understand now more about this file.

First, looking at my interface config file, the first line

I don’t have any interface which is named 0 or conf, so I changed it to

Second of all, it looks like on Debian 11 there is no “ifconfig” installed out of the box.
So I installed the net-tools, did a restart of the whole server and now everything works like a charm without any problems.

P.S.: the “conf” and “0” interface gets assigned to the file on the first creation of a server in Virtualmin. Not sure, if this is correct or a bug…

Again, thanks a lot @Ilia, it looks like the RC-13 of VM7 works pretty well on Debian 11 now. I have faced some issues with fail2ban as well, but I could fix them without problems.

Again, thanks a lot @Ilia,

I don’t have any interface which is named 0 or conf, so I changed it to

Can you remember what changes you made using Virtualmin/Webmin UI. We would like to reproduce the issue.

That looks concerning. @Jamie Do you know if Webmin could by accident add 0 to that auto 0 lo conf eth0 line?

I can’t see how that would happen - Webmin only ever adds interface names to auto , but will preserve all names that are already there.