I got incremental backup on one server and everything works well except one big folder in one virtual server which is actually completely excluded in TAR incremental file under /var/webmin/modules/virtual-server/incremental - there are not recorded all backuped files.

That folder contains over 380 000 files - I don’t know if that is the reason why incremental backups are not recorded correctly but this particular folder is included in every single incremental backup - and it is over 120GB so there is issue with free space in this case.

Where can be a problem?

If backing up from / and if by incremental you mean you have chosen the ‘Just add new files to archive’ option then you must also add -P as an extra command line parameter.

Without -P, files with / in them are compared to files in the existing archive with / stripped. Hence the comparison fails and you get files needlessly duplicated.

Actualy folder is under public_html - full path is ${domain}/public_html/data/uploads - and in other virtual servers it worksl flawlessly. They got same OSS CRM system installed and only in one case where folder is “too big” files are not written to “incremental log file” under /var/webmin/modules/virtual-server/incremental

OK thanks, not the same backup facility. I had, Webmin, System, Filesystem Backup in mind, which is an ancient backup system that can be used independently of Virtualmin servers.

If you completely specify what is in the full backup and incremental backup schedule, what is in the logs and what is actually backed up it will be easier to understand.

Nope. I am saying:

OK thanks. This is clearer. It is a serious problem.

Devs will likely ask for enough information to reproduce the problem. If they do not respond here you can go to Issues · virtualmin/virtualmin-gpl · GitHub

There is a facility to Email backup reports. The report will tell you if the backup has succeeded or failed.

Can you tell us if incremental reports specifically say failure or success? 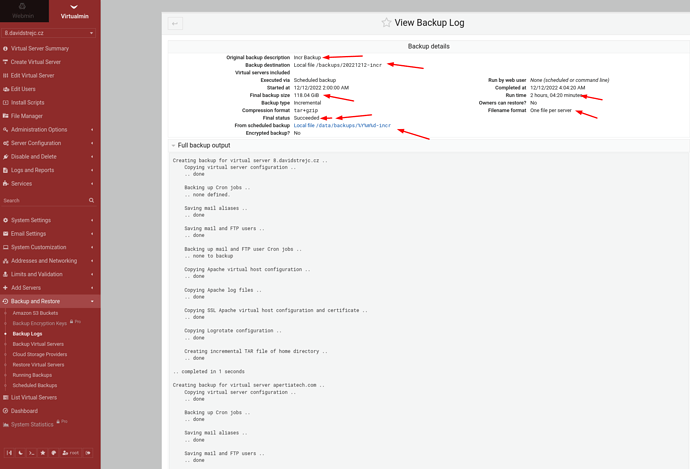 Is this enough? Backup succeeded.

Thanks. I see the run time took over two hours and was declared successful. Because of this it is difficult to attribute blame to Virtualmin for the mess the files got into.

Since the result is incorrect, I would be looking to see if there are multiple backup jobs running at the same time interfering with one another. You can check this with virtualmin, backups and restore, running backups.

How about trying this:

There are multiple different possibilities, such as a backup overlapping with what is being backed up and different virtual server backups overlapping due to symlinks

If you want Devs to look into it, you really need to fully specify a reproducible backup specification that occurs on a fresh installation. Backing up the virtualmin specification and providing it to Devs, or better still giving Devs access to a VPS with a reproduced result.