I created the first virtual server and called it liewrws02.bofhllc.net. It’s got a nice SSL certificate from Let’s Encrypt, and everything so far looks good.

But when I created a second virtual server and called it ellenburg.io as a test, when VirtualMin went to request an SSL certificate from Let’s Encrypt, it failed the validation piece.

Trying to troubleshoot that and when I attempt to go to http://ellenburg.io/ I end up seeing the default website for http://liewrws02.bofhllc.net instead. Which also explains why the Let’s Encrypt validation failed if the wrong website is being served.

Does anyone have any thoughts or ideas? Frankly I’m a bit baffled. I’ve never seen this with VirtualMin before.

I found the problem thanks to Gomez_adams.

Once I removed the AAAA records from the domain everything now is working as it should.

When I go to ellenburg.io and bypass the SLL warning I see the Virtualmin default.html but the address is ellenburg.io.

It’s working as it should. All virtual server you create in Virtualmin start out with the same default.html.

Look at your address bar, not the page. It’s working as it should.

It’s not because there’s a different index.html file in that directory.

This is what I see when I request an SSL certificate:

It is working exactly as it should. 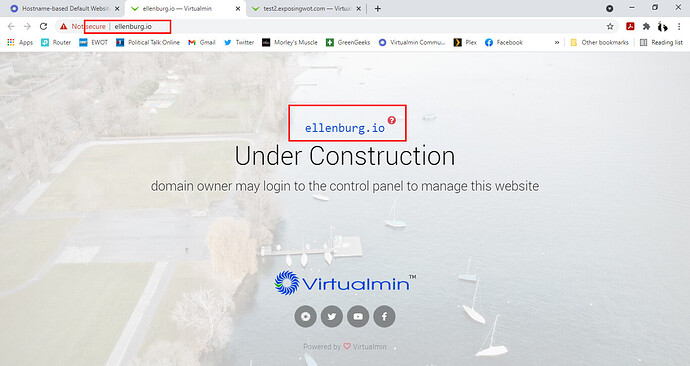 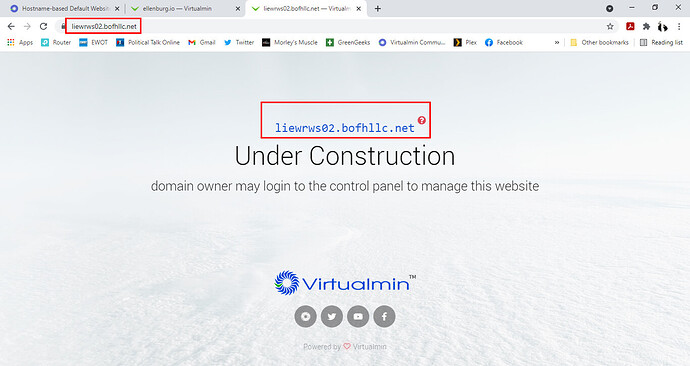 If you are seeing something different, try clearing your cache out or using a different browser.

Edit to add: go to edit virtual server on ellenburg and make sure enable SSL site is checked.