Failed to save interface : Bridges cannot be created unless the brctl command is installed

Did not get any result for dnf search brctl either

We not yet support RHEL 8 for Cloudmin master installations. Sorry.

you probably need to look for bridge-utils package. (that’s the name in debian at least)
brctl is part of that package.

you probably need to look for bridge-utils package. (that’s the name in debian at least)

Unfortunately, this wasn’t the only problem.

Thanks. Installed bridge-utils on Rocky 8

and ifup br0 did the magic.

So, Cloudmin will not work on Rocky Linux 8?

It will, if you could configure things as bridge manually. Although there were major releases of KVM, Xen, LXC and probably other, which current version of Cloudmin may not work with properly.

Please give it a try and let us know how it goes. It would be helpful.

I created the bridge.

Creation of a guest did work, but cloudmin did not start the guest os after creation.

Here is a screenshot of network 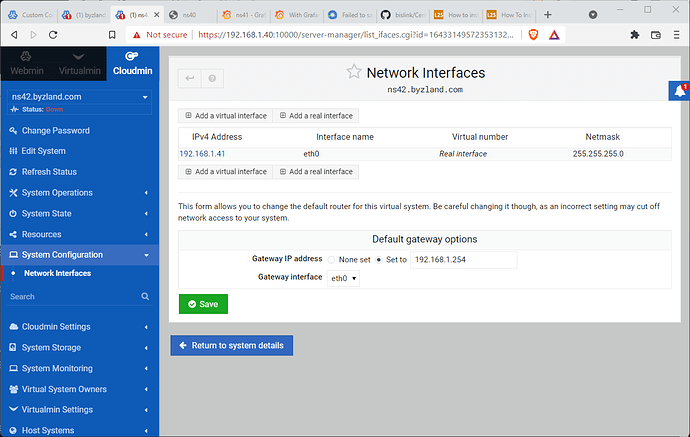 Yes, that’s what I meant in the comment above. Unfortunately, those params like vlan are hardcoded on Cloudmin side, which were deprecated in QEMU 2.9.0 and removed in a subsequent release.

@Jamie do you remember fixing it upstream may be?

I’ve fixed this issue in the Cloudmin source already … at least I though I did. The current check assumes that only KVM versions below 2.12.0 support vlan , but it sounds like the actual version it was removed in was 2.9.0 ?

but it sounds like the actual version it was removed in was 2.9.0 ?

I think version 2.9.0 makes it deprecated, while version 3 makes it removed and incompatible.

Ok, I will update Cloudmin to not use the vlan option after 2.9.0

So, what am I supposed to do? Looks like you both are discussing about it…

This fix should be expected on the new Cloudmin release in the future.

However, you can manually tweak it right now by editing /usr/libexec/webmin/server-manager/kvm-type-lib.pl and changing kvm_host_supports_vlan sub (at the very end of the file) by

did not find exact match for that line(s) in that file!

But, could find 3 lines matching &compare_versions($ver, "

also, no such sub kvm_host_supports_vlan in that file