The Package utility in the installer at this URL is not accessible from any machine in multiple networks I have tried the link:

I can install pkgutil via

Is there a specific version of pkgutil that the script needs?

hi I think you should only install on vanilla os support as far as I can see, your os is not available.

I managed to change the code in the installer and get it installed.

The os is a fork of the Solaris OS, we have 6000 hosts running OmniOS. Please don’t tell us to try a different OS.

" The best supported systems at the moment are Solaris, Linux (Redhat in particular) and FreeBSD. "

Here is the configuration file and how I adjusted it:

Please don’t tell us to try a different OS.

The approved and supported OS’s are listed for a reason. They can’t possibly support every obscure OS on the planet. Solaris itself hasn’t had a new release in three years now. And you’re an unheard of fork off of that.

Kudos to your ability to fix it though. Given what you’re working with, that’s impressive.

Then how about stop supporting Solaris since it’s not longer being maintained and work with the fork that IS actively maintained? Also runs Bhyve, which would be a awesome addition to Cloudmin as it offers Native ZFS based backups of the underlying filesystem. 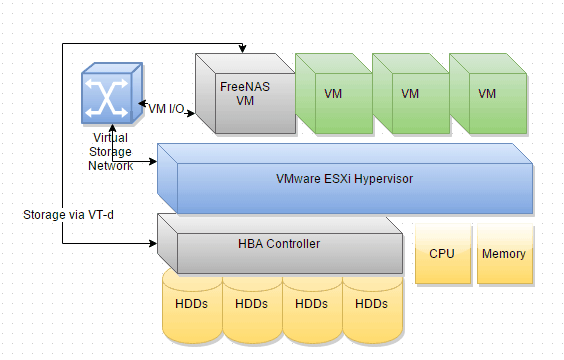 Playing with bhyve Here’s a look at Gea’s popular All-in-one design which allows VMware to run on top of ZFS on a single box using a virtual 10Gbe storage network.  The design requires an HBA and a CPU that supports VT-d so that the storage...

There are some pretty impressive features of Bhyve.

I don’t think you’re getting the point. From the Cloudmin site:

If you have a choice of operating systems and are planning to host Xen or OpenVZ instances, we recommend running the latest version of CentOS if possible.

From the Virtualmin site:

Grade A systems have an automated installation script, a well-maintained software repository for updates, and are expected to work “out of the box” if you run the install script on a freshly installed system running one of these operating systems. We recommend the current stable release of one of these systems for most users. We do not support beta or pre-release versions of any OS.

It’s that simple. I understand you love your OS, but it is not supported. Nor is Solaris. Neither of them ever were. That’s the point.

If you don’t provide ANY support for ANY Solaris then you should remove it from the documentation that you do: 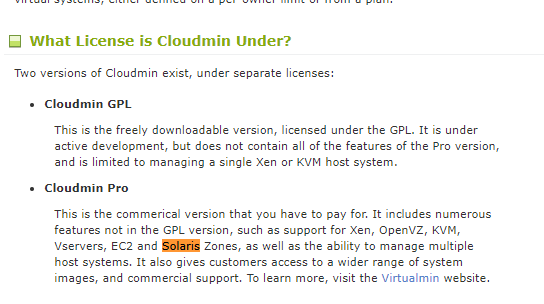 Again, I don’t support anything. I’m just a user. You’ve been picking fights and getting all butthurt because nobody has ever heard of your OS and recommended you pick a new one.

If you can’t help or be productive, your not helping. If there are others who can help or want to help sure.

Also you tactics of saying its a OS no one has heard of before is pretty ignorant and a subversive tactic, specifically an appeal to ignorance:

Please try not to be a toxic person.

Also, Just want to point out they even provide the INSTALLER for it on Solaris.

Please take your non help to a forum that appreciates non help.

If you can’t help or be productive, your not helping.

You need to back up, pal. This is what was said:

The approved and supported OS’s are listed for a reason. They can’t possibly support every obscure OS on the planet. Solaris itself hasn’t had a new release in three years now. And you’re an unheard of fork off of that.

Kudos to your ability to fix it though. Given what you’re working with, that’s impressive.

That is factual. What’s more, your OS isn’t listed either. That’s the only reason anybody recommended you change OS. I even congratulated you on being able to figure it out.

But you’ve been nothing but offensive and all bent out of shape because someone recommended you change your OS since it’s not a supported OS and nobody has heard of it.

Jesus. Get a grip. Take a compliment and let it go.

My point is that it IS supported as the script doesn’t even run on Solaris Machines . . .

Shouldn’t sell a license to something that you provide an installer for and documentation also states its included in support for the PRO licenses.

If I could feature request, it would be the ability to run KVM via Cloudmin on OmniOS/Solaris, we already run KVM on OmniOS (aka Solaris) without issue. I see there is a KVM module installer, can anyone point out to me where I can find the code for how that works so I can tweak it?

Note that no one in this thread so far is a Webmin/Cloudmin/Virtualmin employee or developer. And, also everybody please chill out on the hostility.

OmniOS isn’t exactly Solaris, and it’s not something Jamie or I have ever tested on. And, honestly, I don’t think Jamie even has a Solaris box anymore; his Sun servers were destroyed in a fire, and I doubt he has any x86 Solaris (or OmniOS) systems. We probably should remove it from the list of supported OSes at this point. Jamie is a fan of the OS…but, we don’t have a lot of people using it there. We used to have a pretty big sponsor (in addition to Sun) who made sure we always kept it tested and working, but they’re long gone (they don’t offer the products and services that they used Cloudmin and Virtualmin for, anymore).

In short: We welcome feedback and patches to make OmniOS work. But, I don’t know if we can actually effectively support any Solaris-derived OS, anymore. There just aren’t enough people using it and buying it to devote resources to it at this point. I’ll ask Ilia to remove the links from the licenses page, at least, and we already have removed mention of it from the store and such, long ago (but, there are old docs that still mention it that need an update). We won’t remove the installer and support as long as it still works, but unless someone steps up to help out with it, we don’t have the resources to develop it further.

I should also be clear that just because Webmin.com says something is “supported” it doesn’t mean we, as a company (Virtualmin), can provide commercial support for it. Webmin includes support for a gazillion Operating Systems we’ve never even seen, and we can’t provide expert advice for them, but we’ll merge PRs when people who do know those systems sends them our way. Webmin.com is about the code, not the company/services.

If Cloudmin needs a sponsor, I am sure that I could easily talk to my boss. I can’t say for sure we would need something for all 6000 of our hosts. We would be happy to provide development boxes on site as well for your to run CI against the latest builds and I would be happy to try to facilitate it. My Problem is I come from more of a SysOps, with strong emphasis in dabbling in coding. So I can’t make quick progress on the code side necessarily on the actual module unless its C++/Python or PHP.

I do suggest that you take a look at the uploaded script so that if anyone else does install it on solaris it pulls the right packages. I only purchased the Cloudmin license because it states it supports Solaris Zones, while not LX Zones or Bhyve, I know that the module itself, if I could get to the source, I may be able to get it to work with Bhyve. That would make you competitive to TrueNAS in regards to appliances/plugins that you can install on the OS.

The ability to use native ZFS (even though Ubuntu has recently ported it as well) and the ability to run Bhyve is a tool we won’t give up, it is simply too powerful and works wonderfully performance wise as hypervisor when we are trying to packer more servers per host.

The OmniOS community is fairly active and have a regular release cycle.

I appreciate you updating the documentation so that people don’t buy the Cloudmin pro license think they will get support for Solaris Zones which is advertised:

I apologize for any hostility. I was just under the impression the thing I bought which was advertised under the Pro licensing was supported by the company I bought it from and that no one here care because it’s a OS they(the forum members) know nothing about.

Even on Solaris the URLs are incorrect in the Installer, so maybe the people who own and manage the code can update it for others.

I know that the module itself, if I could get to the source, I may be able to get it to work with Bhyve.

The source is not obfuscated, so if you have it installed, you have the source (I don’t know what path on Solaris derivatives, maybe somewhere in /usr/local or /opt? but the directory you’re looking for is webmin/server-manager). I just realized Cloudmin GPL is not in a public repo in our github, so that’s yet another thing I’ll add to my todo list.

I apologize for any hostility. I was just under the impression the thing I bought which was advertised under the Pro licensing was supported by the company I bought it from and that no one here care because it’s a OS they(the forum members) know nothing about.

We always offer a full refund within 30 days of purchase, for any reason. We don’t want an unhappy customer under any circumstance. I wish I could reassure you that OmniOS will be well-supported in some near future, but it seems unlikely any of us (Jamie, primarily, though Ilia is beginning to work on Cloudmin some, too, and I’ve had refactoring the installer on my todo list for literal years) will be able to spend much time on it. We’re a very small company (four people), and we all have other jobs (by necessity, selling free software is a challenging business). As you note, the docs are a mess (not just due to the recent messy migration of our website from Drupal to WordPress, but that didn’t help the situation), we’re way behind on releasing Virtualmin 7, etc.

I’d much rather work WITH you than against you!

This great information, I will need to go look at all the files to really understand the structure, but I wasn’t fully aware that parts of the Cloudmin stuff were included since it’s behind a login prompt and that was the only place I could get the Cloudmin module.

Let me speak to the higher ups about a partnership/arrangement for tools to provide a CI/CD environment to help make builds that work on OmniOS, we tool are fairly small team compared to Sun, about 20 or so, so we understand the struggles.

In regards to documentation. Personally I document half of the companies internal wikis as it is. Please let me know how I can get involved in helping with that. Also this may be better moved to a private message, but is there a specific software stack that you use to build and unit test? If So I may be able to replicate it with something like Jenkins/Ansible and Vagrant.