For CentOS users who like me on 8.5 and not quite sure what to do after EOL… all the panic in the media 6 months ago quite funny, driving the hype up fuelled by new forks and what not. Today, even one of the founders who started Rocky recently said: ‘ah I get it now’ - it is actually better. Anyway, not joining the debate about if/what scenario. You can visit other sites for that.

My Problem:
The obvious choice was to switch to RHEL as it’s now free, 16 servers plenty for my use and I like the OS. Many providers don’t have RHEL iso/auto install, can do it manually but that wasn’t the point. Many online guides using the converter from CentOS to RHEL - useless. They fire up a blank virtual container, run the script and then say ‘this is how you do it’. Completely bonkers, I wonder how many actually converted a production server with real data and reviewed implications. Script does work but you may also need to ‘patch up’ various services afterwards. Which I found out later.

My way out of EOL:
I am actually not doing RHEL, free or not. I always got tired of outdated packages and at times its clunky way of dealing with innovative solutions. Instead, I am moving to CentOS Stream 9. In other words, the updates posted to CentOS Stream are identical to those posted to the unreleased minor version of RHEL. Debian/Ubuntu etc never an option for me, guess I got traumatised when younger and since then stayed away.

If you are on CentOS 7/8. Don’t want to move to RHEL. Give CentOS Stream 8/9 a test (for real). I think it’s worth the test at least. You get stability along with newer packages - what I wanted in the first place. Anyway, just a little hello from one CentOS user to another.

founders who started Rocky recently said: ‘ah I get it now’

I am for the moment on alma with more control panels.

But if, as we said above, CentOS Stream has not come to replace CentOS,

(In fact, Red Hat has already stated that Stream is not a replacement for CentOS8.) 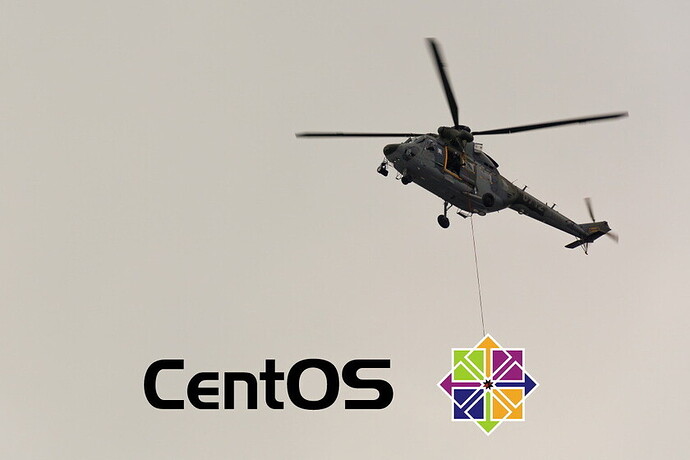 Your Users Must Decide Between The CentOS Stream Successor And Six...

A year ago now, Red Hat announced the death of your CentOS Linux community distribution and your plans for launch a substitute with a similar name, but very

Interesting for those who install on boxes with … hardware specs: (Virtualmin Support i don’t know! )

Navy Linux: Perhaps the least known option on the list, this clone of Red Hat Enterprise Linux differs from its rivals by being focused on teams with minimal hardware requirements. It does not offer the installation of a graphical environment, only what is essential to function as a server. It is a project founded by Domingo Ruiz, a young Spanish computer scientist.

I just went to Ubuntu after RedHat basically said CentOS is not to be considered production software however for what I read many things should work fine but there is no guarantee something doesn’t go wrong either. And to be honest how much can I trust them after putting out an OS, letting a ton of people upgrade then tell them they are killing it at the end of the year with little warning. Since switching I’ve found way less problems, easier installs and just an overall better experience so honestly kinda glad they did it.

CentOS Stream fine for production. However it depends on what and how people define ‘production’. My view is that corporate or hosting providers with experience of CentOS should now take the advantage and use RHEL as first 16 physically servers are free. It would be silly not to do this. Most will never reach that. For hobby users like me, hosting a few sites on an overkill dedicated server - CentOS Stream is perfect as it is modularised with individual newer packages. As for stability it’s pretty much the same as ‘old’ CentOS. Since real life experience is best option, I will run another server on RHEL in parallel. Yes, many moved to Ubuntu, some may move back at some point when things have matured a little. As long as you are happy

Thank you for the suggestion @Whoops it is the same as @Joe suggested to me some time ago, continue with Centos 8, I will continue with my test VPS with CentOS 8.2.2004, for my Centos 7 Production VPS, I still have time to see the results.
Best regards.

It’ll probably mostly work if you install CentOS 8 and then convert to Stream, but you’ll diverge from the supported OS over time, and it will eventually break, if Virtualmin doesn’t have some kind of support at that time. I don’t know what that support looks like, or if we’ll ever have resources to implement it, though. So, I strongly recommend you not use CentOS Stream with Virtualmin in production at this time (and maybe never).

CentOS 8 is fine. You can convert to Alma or Rocky at any point, and they will be fully supported by Virtualmin and installer quite soon.

Please @Whoops from time to time share your experiences with Red Hat and Centos Stream, regards.

Thanks for the clarification @Joe so is no RHEL or Centos Stream, just Alma or Rocky, Which one would you recommend most?
Thanks and regards

I don’t have any opinion as yet about which of Alma or Rocky is better maintained. They both seem fine, so far.

@joejac its more of a personal preference. CentOS 8 can easily be converted to Alma or Rocky without too much of a trouble, downtime or data loss. The converter is painless. Personal experience is that it requires a little more work to convert to RHEL 8, if already production server. If blank/ new server the conversion to RHEL 8 a little easier.

As Virtualmin won’t support CentOs Stream (shame), I would visit Rocky/Alma community and see for yourself which one has a better feel in terms of community users/ support. My guess is that both will be supported strongly for some time until one ends up as the stronger. In the future, many will use CentOS Stream (delayed reaction) once they realise the benefits but will take time to mature.

I am on CentOS 8.5 but will not move to Alma/Rocky. Why use a clone/copy of RHEL when I can use the original? I will convert over later this month. The RHEL portal is free and the 16 free licenses plenty for me. I’ve done some test run with auto signing license/ assign license and it works fine. The RHEL portal may look a bit complicated initially but it won’t take long before you get the hang of things.

Again personal preference. It is not about right or wrong. If you have the ability to use VPS/dedicated server and test the conversion CentOS 7/8 to RHEL 7/8 without affecting production - I would test the process at least.

Thanks a lot @Whoops for your information, I agree with you, the original should be better than the clones. I never tried RHEL, for me a couple of licenses would be enough, I won’t use 16. My VPS provider does not have RHEL images, only Alma, Debian, and Ubuntu. But first, I will install one RHEL on a local virtual machine, in order to test it and also to test Virtualmin on RHEL.
Best regards.

Few providers have RHEL 8 images. Most will support manual install of RHEL 8 but that will involve uploading iso, use script and also depends on provider. Many support CentOS 8 still so you can load that then convert to RHEL 8. Some will also support Alma/Rocky during setup and as auto install. If you have the time and budget, perhaps try something like this:

Although CentOS 7 is supported. Personally, I would find it useless and outdated it’s a joke why it’s supported so long.

As with everything. It’s important to have a plan and a check list. R&D key to success. We try, we fail and we try again

Hello @Whoops and @Joe hope everybody is doing well.
I got to the point where I have to migrate Centos 8 to another OS. I tried convert2rhel, the conversion to RHEL 8 looks simple but I had no luck, probably due to the virtualization used by my inexpensive VPS provider.
I get,

They have images for Alma Linux 8, Debian 11, Ubuntu 20.04, their staff recommended Ubuntu since can be upgraded to the next version with a command, with no reinstallation.

I would appreciate the advice of the most experienced and the Virtualmin developers, for me 3 things are important: full compatibility with Webmin/Virtualmin, Apache, PHP, MySQL/MariaDB, BIND, automatic upgrade to the next version, and very good stability.
Thanks and regards
joejac

Alma 8 and Rocky 8 are safe cross-grade paths. We will definitely support both of those for the foreseeable future.

Thanks @Joe, and what about Ubuntu, is worthwhile? with Centos clones I will have to reinstall in 5 years. I do not have a problem reinstalling now, this VPS is not used much, and I am going to install a PHP/MariaDB Help Desk and about 4 websites.
Regards

I don’t use Ubuntu. I know many people like it, but they’ve made too many bad decisions for my comfort on a server (but, Eric prefers it, and it’s probably more popular then CentOS at this point, even on servers, due to the nutty Stream thing). But, we’ll support Ubuntu 20.04 for the full life of the distro. And, Ubuntu upgrades are historically a bit easier than CentOS upgrades.

If you like the stability of CentOS, Alma and Rocky or RHEL are the only options to consider. Ubuntu and Debian are both more like CentOS Stream, and always have been. They do not make guarantees about package versions and compatibility for the life of the release the way CentOS historically did.

Hello, I installed Alma 8.5 and when installing Virtualmin I got:

▣□□ Phase 1 of 3: Setup
[ERROR] Your OS is not currently supported by this installer.
[ERROR] You can probably run Virtualmin Professional on your system, anyway,
[ERROR] but you’ll have to install it using the manual installation process.

In your post here you said are not yet supported, I did not know

Error 22 trying to install on almalinux Help! (Home for newbies)

AlmaLinux is not yet supported. Virtualmin OS Support – Virtualmin Things in the git repository should not be expected to be production-ready. The current install script is linked on our download page.

Manual Installation - Installation of Virtualmin and related packages manually. This method is time-consuming, and requires a high level of technical experience. This is not recommended , except in cases where the automated installation is inappropriate or impossible.

I do not have “high level of technical experience” What can I do then?

Install on CentOS 8. Switch to Alma or Rocky. Or wait on Virtualmin 7.