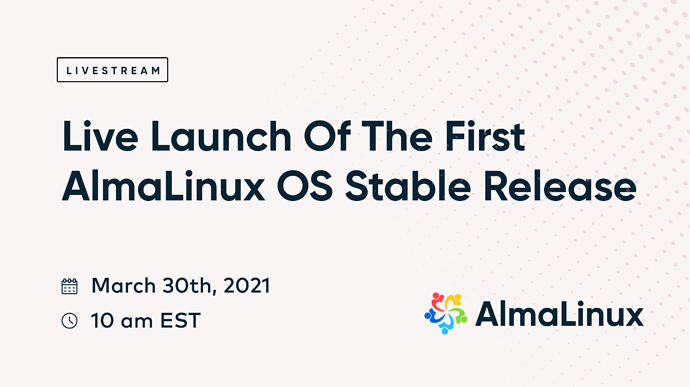 To celebrate the launch of the stable release of AlmaLinux OS. 10 am EST on Tuesday, March 30th, 2021. There will be surprises and swag!

I will run some tests tomorrow to see how it goes.

I think all you have to do is tell the installer to recognize it. I did have one nagging problem with my hacked install script (hacked to recognize AlmaLinux), however, namely, that Apache would run, but would show up as stopped in the indicators. That one puzzled me because systemctl status httpd would report accurately.

Overall, my most successful result was to install CentOS, install Virtualmin, install additional PHP versions, migrate the sites, and then migrate to AlmaLinux. Kind of counterintuitive, but it is what it is I suppose. That’s after installing it about a dozen times, maybe more, in different ways. It really makes no sense. One would think that migrating the OS first would have worked best, but it didn’t.

In any case, this is a good development. Thanks.

I have run few tests and can tell that Webmin is already supporting and detecting AlmaLinux correctly. Anytime @Joe adds Alma repos to our software.virtualmin.com/vm/6, I will adjust automatic install.sh script for easier deployment.

I only tried directly installing Virtualmin on AlmaLinux once, and it detected it properly, but refused to install on it. Maybe that’s changed since then. I’ll wipe the VM and try it native again. Thank you.

The first time I successfully installed Virtualmin on AlmaLinux was by masquerading AlmaLinux as CentOS, which worked perfectly.

The rest of the attempts were at ways that allowed AlmaLinux to be itself by running the migration script after Virtualmin was installed, which worked, but with various glitches. But it worked perfectly when any other system modifications (additional PHP, CSF, etc.) were done, and the site(s) imported, before the AlmaLinux migration was done.

That really makes no sense to me, by the way. But it was what I experienced doing it that way twice.